Our fabric materials meet or exceed the minimum requirements of one or more of the following flame resistance standards. 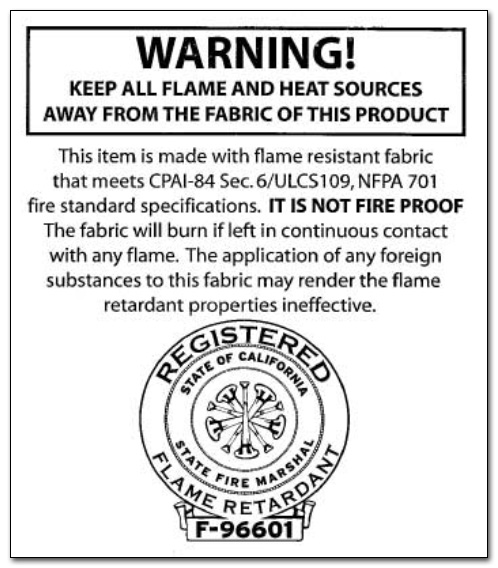 Although the average person is probably unaware of flame retardancy standards and regulations in the United States, this is an area that is of increasing concern for food vendors, event planner and trade show exhibitors. Ensuring the safety of the public means that anyone utilizing drapery fabrics in a public space, needs to be aware of the potential for fire — and take steps to reduce that risk to the greatest extent possible.

National Standards
Unfortunately, it is not easy to navigate the maze of standards, regulations and requirements regarding this issue. Surprisingly, there are no “official” federal regulations regarding flame retardancy of drapery fabrics used in public spaces. However, there is a national standard developed by the National Fire Protection Association (NFPA), titled NFPA 701: Standard Methods of Fire Tests for Flame Propagation of Textiles and Films. Under NFPA 701, drapery fabric is tested by burning a small sample and measuring the flame, char length and flaming residue. If a fabric meets the NFPA 701 standards in these three areas, the fabric is considered flame retardant.

State and Local Regulations
Though NFPA 701 is the national standard, it is not a law or regulation in itself. Authority to make and enforce laws and regulations in this area is granted to state and local governments. Many state and local governments have not developed their own standards. Instead, they require that draperies used in public spaces meet the NFPA 701 standard. The 2005 Florida Fire Prevention Code, for example, specifies in Chapter 20 that fabric used in places of assembly must meet NFPA 701 standards.

Some states and cities, however, have developed their own standards and/or procedures. In California, for example, drapery used in public spaces must be made of fabric that has been registered with the State Fire Marshal, documenting compliance with Title 19 (Division 1, Chapter 8) of the California Code of Regulations. These requirements are separate and distinct from NFPA 701 standards. While the State of New York and the Commonwealth of Massachusetts both accept NFPA 701 certification, New York City requires certification that fabrics meet requirements outlined in Title 27 (Chapters 1 and 4) of the New York Administrative Code, while the City of Boston requires that end users submit an application for a use permit, in advance, for each fabric to be used in a public space.

Both CPAI-84 and NFPA 701 are methods that assess the flammability of fabric. CPAI-84 is a specification written especially for materials used in tents, whereas NFPA 701 is a more general test method. However, NFPA 701 does have provisions within it for samples to be exposed to weathering before being tested, making it appropriate for use in assessing the flammability of a material intended for use in an outdoor end product.

Fabrics used in most public spaces (including schools, churches, auditoriums, theatres, and more.) is required by law in many states and cities to be certified as flame retardant, according to standards developed by the National Fire Protection Association (NFPA). NFPA has various standards depending on how the fabric will be used. In the case of draperies, curtains, and similar hanging textiles, the standard that applies is NFPA 701: Standard Methods of Fire Tests for Flame Propagation of Textiles and Films. This test measures the flammability of a fabric when it is exposed to specific sources of ignition. NFPA 701 (Small Scale) testing measures the ignition resistance of a fabric after it is exposed to a flame for 12 seconds. The flame, char length, and flaming residue are recorded. The fabric will pass the test if all samples meet the following criteria:

An after flame of less than 2.0 seconds.
A char length of less than 6.5”.
The specimen does not continue to flame after reaching the floor of the test chamber.

Fabric certified as flame retardant is certified to have been tested and passed the NFPA 701 test.